An Efficiency Analysis of the Hotel Industry Across U.S. States: A Data Envelopment Analysis 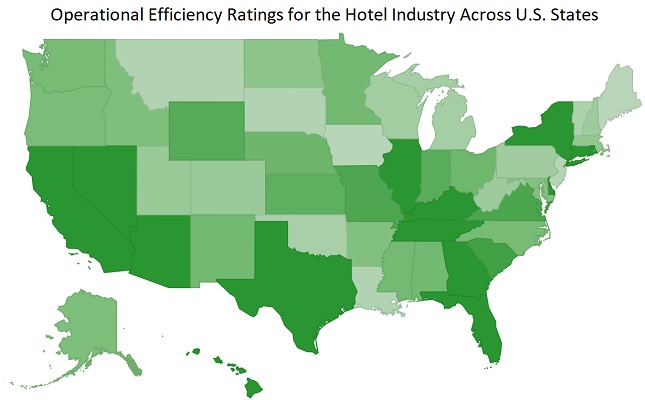 The report assesses direct effects² of the hotel industry – hotel operations, hotel guest ancillary spending (guest spending at hotels and local businesses, and on transportation), and capital investment (investment in the construction of new hotels, and renovation of existing hotels excluding maintenance). It also provides estimates of the downstream impacts, including indirect² and induced effects², using IMPLAN, an economic impact model. Finally, it provides estimates of fiscal impacts², based on estimates of specific taxes (e.g. taxes on lodging and hotel property taxes, and other taxes derived from the economic impact model.

These state-level primary expenditures were entered into the model for each state to produce estimates of the secondary effects of the expenditures on economic output, labor income, employment and GDP. These secondary impacts, or induced impacts, comprise spending by businesses and individuals who receive hotel-related direct and indirect expenditures as revenue or earnings. The sum of the primary and secondary impacts equals the total economic impact of the hotel industry on a state’s economy. Based on the structure of the economic model, an estimate of value-added activities within the hotel industry sector is used to identify the contribution of hotel-related economic activity.

To help answer the question, we turn to Data Envelopment Analysis (DEA), a performance measurement tool we have used successfully to improve hotel productivity and identify significant annual expense saving not identifiable with traditional financial and operating ratio analysis. For an explanation of how DEA has been used to determine the efficiency of individual hotels, please refer to the articles listed at the end of the post.

DEA is a non-parametric linear programming technique that computes a comparative ratio of outputs to inputs for each unit (a state’s hotel industry in our case) which is reported as the relative efficiency score. The efficiency score is usually expressed as either a number between zero and one or 0 and 100%. A state’s hotel industry with a score less than one is deemed inefficient relative to other states. DEA does not require any assumption about the explicit functional form between inputs and outputs.

An efficient state’s hotel sector is one which produces a maximum amount of output, while utilizing a minimum amount of inputs. A “best practice” envelop is constructed from the most efficient states. States lying below the output surface are deemed inefficient and their distance to the frontier is a measure of the degree of their inefficiency.  Moreover, states with an inefficient hotel sector can be examined in order to identify the sources of inefficiencies in terms of output augmentations or input reductions required for these states to reach the efficient frontier. Detailed hotel-related statistics for the inputs and outputs used for each of the state’s are found in the accompanying AH & LA report..

Our final models used the following inputs and outputs:

Our DEA models treat each state’s hotel industry as a decision making unit for the purpose of determining the efficiency of the hotel industry in aggregate at the state level. Based on the inputs and outputs listed above for the six DEA models, an efficient frontier was constructed which comprised states which used as little input as possible while producing as much output as possible.

The following table shows the relative efficiency scores for the different levels of economic impact for the hotel industry in each of the 51 states. The hotel industry in 15 states, including California, Texas, Florida and New York were deemed efficient, while 36 states were deemed operationally inefficient with an average efficiency score of 83.5%.

Super efficiency is used to break the tie of states that are efﬁcient when using the simple DEA envelopment model. In other words, if ﬁve states are efﬁcient with a score of 1, then super efﬁciency will rank them from best to worst, with the highest score being the best. Of the 15 states deemed efficient, five had the best super efficiency score (California, Florida, Hawaii, Nevada and Texas).


Efficiency Score Ranking for the Hotel Industry Across U.S. States

Source: Hotel Investment Strategies, LLC based on an analysis of data in the report "Economic Impact of the US Hotel Industry" funded by the American Hotel and Lodging Association Educational Foundation and undertaken by Oxford Economics.

Descriptive Data on Efficiency Scores for the Hotel Industry Across U.S. States

Source: Hotel Investment Strategies, LLC based on an analysis of data in the report "Economic Impact of the Hotel Industry" funded by the American Hotel and Lodging Association Educational Foundation and undertaken by Oxford Economics.


DEA provides more than financial measures of performance. It can:

The pie chart shows the relative percentages of potential improvements for each input/output. This is achieved by adding up the potential improvements for each state. The most prominent input reduction involved the number of guest rooms which were the most over-utilized resource relative to the level of output in all of the inefficient states. The movement toward efficiency requires that hotel employment be reduced by 29.6%. Choosing input minimization, the DEA solutions sometimes also indicate that some states can optimize their outputs too. The number of occupied room nights appears quite infrequently as an excess output.

Scroll over the pie chart to highlight data.

The issue of productivity and efficiency should be at the heart of any hotel organization. Whether the prime aim is higher profits, higher overall shareholder value or larger market share, hotel owners and operators can substantially improve the efficiency and profitability of their hotels by employing DEA. The technique can be applied in many different ways and in many different sectors of the hotel industry.

¹ For the purpose of this study, the hotel industry was defined as including the following types of business establishments (each sector is also referenced here by the corresponding code in the North American Industry Classification System): 

² Direct effects: Also referred to as direct impacts. Includes direct spending and revenues, in this case from hotel operations, hotel guest ancillary spending, and capital investment; as well as the corresponding employment, income and fiscal impacts.
Indirect impacts: Downstream supplier industry impacts, also referred to as supply chain impacts. For example, hotels require inputs such as energy and food ingredients. Also can refer to indirect and induced impacts combined.
Induced impacts: Arise as employees spend their wages in the broader economy. For example, as hotel employees spend money on rent, transportation, food and beverage, and entertainment.
Fiscal impacts: Tax revenue, as well as contributions to Social Security and unemployment insurance, as well as government revenue from various fees.