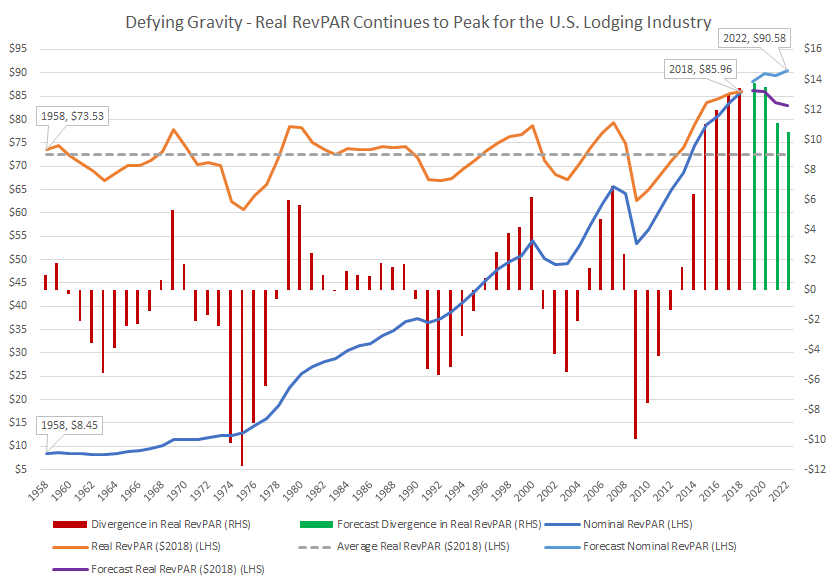 “Stable (albeit Decelerating) Fundamentals”, “U.S. Hotels to Peak in Mid-2020”, “Good Enough: 2019 Setting Up to be a Replay of 2018” and “Outlook for 2019 is Positive But With Plenty of Bumps” are just some of the headlines providing a range of sentiments for the U.S. Lodging Industry over the next year or so.

Lodging industry participants can make better sense of the prognostications of industry soothsayers if they’re aware of mean-reversion, a financial theory suggesting that asset prices and returns eventually return back to the long-run mean or average of the entire dataset. See the footnote for a detailed explanation of the concept.

Mean-Reversion: The Search for Equilibrium

The following table provides the results of our mean-reverting Real RevPAR simulation for the U.S. Lodging Industry. It can be used to determine how far Real RevPAR has diverged from its equilibrium state and the probability of further upside or downside. Providing a similar analysis at the metro, tract and competitive set level has proved to be a significant investment and asset management tool for investors.

If investors understood that real NOI is mean-reverting, they would expect high growth when real NOI is low and low growth when real NOI is high! Relatively high cap rates should be applied to high real NOI and relatively low cap rates should be used for low real NOI. Without a clear understanding of mean-reversion many investors are likely to repeat the mistakes of the past by undervaluing hotels near the bottom and overvaluing hotels near the peak of a market cycle. Supply, demand and mean-reversion are fundamental concepts of Hotel Investment 101! We trust you enjoyed the read!