On Assignment in Bali: Examining the Economics of the Top 20 Beach Clubs! 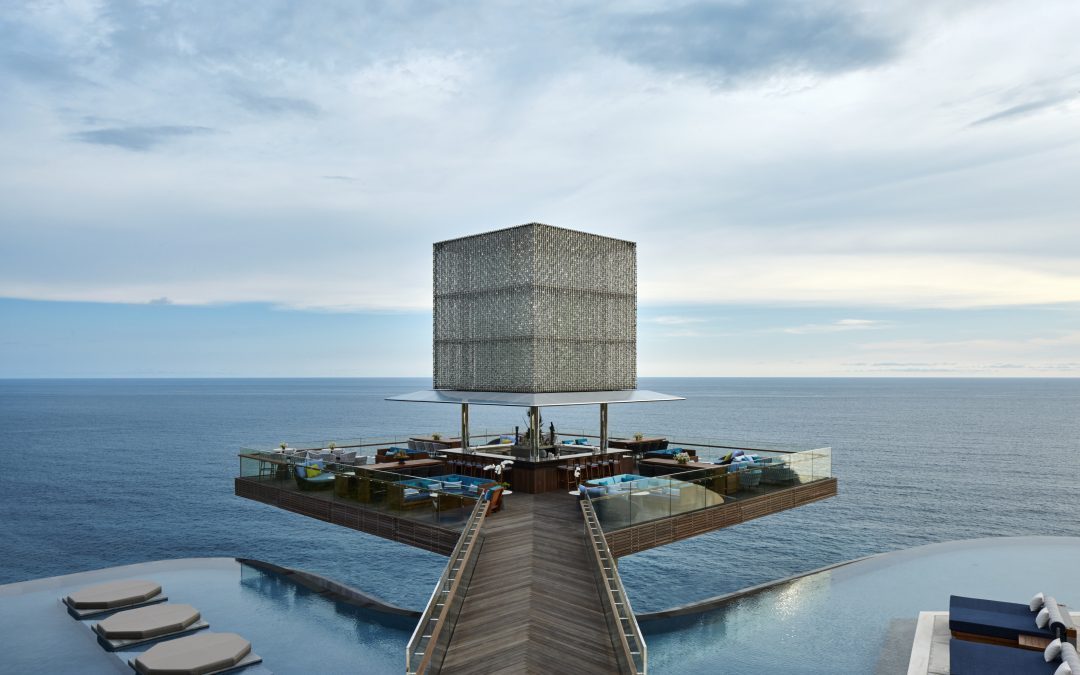 It’s not every day that one has the opportunity to “inspect” some of the best beach clubs in Bali, Indonesia, if not the world and call it work! The mere mention of Bali evokes thoughts of a paradise. It’s more than a place; it’s a mood, an inspiration, a tropical state of mind!

On assignment in Bali during April and May for an Asian client seeking a market entry strategy into the burgeoning high-end international visitor market, I had the good fortune to visit a large number of beach clubs around the island and examine the economics of these stand-alone or ancillary hotel facilities. Bali measures 62 miles from north to south and 54 miles east to west, so apart from chaotic traffic, it wasn’t difficult to visit most of the top rated clubs in about a week. The rules of the road are more like suggestions in Bali! For those of you that haven’t been to Bali, the following video neatly encapsulates the spirit of the island.

No, it wasn’t a “pub crawl”, but an ordered inspection of the Top 20 Beach Clubs on the island. Among the beach clubs examined were Potato Head in Seminyak, Woobar at W Hotel in Seminyak, Komune Resort in Keramas, Vue Beach Club in Canggu and El Kabron Cliff Club at Uluwatu. Beach clubs are a big deal in Bali and in recent years their number has grown significantly, along with the number of foreign tourists which grew to almost 5.7 million in 2017, up 15.6%  over 2016. As the number of international and domestic tourists has grown, the beach club scene has morphed into different types of clubs catering for different types of tourists in different locations.

Launched in February 2018, the Omnia Bali Dayclub joins a string of high-end day clubs in the Uluwatu area of Bali’s Bukit Peninsular and draws guests from all over Bali. Located 30 minutes from Ngurah Rai International Airport and 15 minutes from Jimbaran Bay near the renowned Uluwatu Temple, the club is situated at the edge of a limestone cliff on the same estate as Alila Villas Uluwatu. The design is a result of two internationally renowned design powerhouses: WOHA, a Singapore-based practice renowned for their deft integration of environmental and social principles, and Rockwell Group, a multi-award winning interdisciplinary firm based in New York who have created extraordinary architectural experiences the world over.

Boasting majestic and uninterrupted views of the Indian Ocean and located on the south-western tip of the Bukit Peninsula of Bali, Omnia provides an all-day dayclub destination where the experiences are uniquely found and many in number. Perched atop a 100-meter plateau overlooking the beauty of the limestone ocean floors below, Omnia Dayclub provides an extensive range of facilities and services including infinity pools, exclusive bungalows with private plunge pools, VIP Cabanas, swim-up bar, oversized pool beds and poolside music, the heartbeat of the Omnia brand. 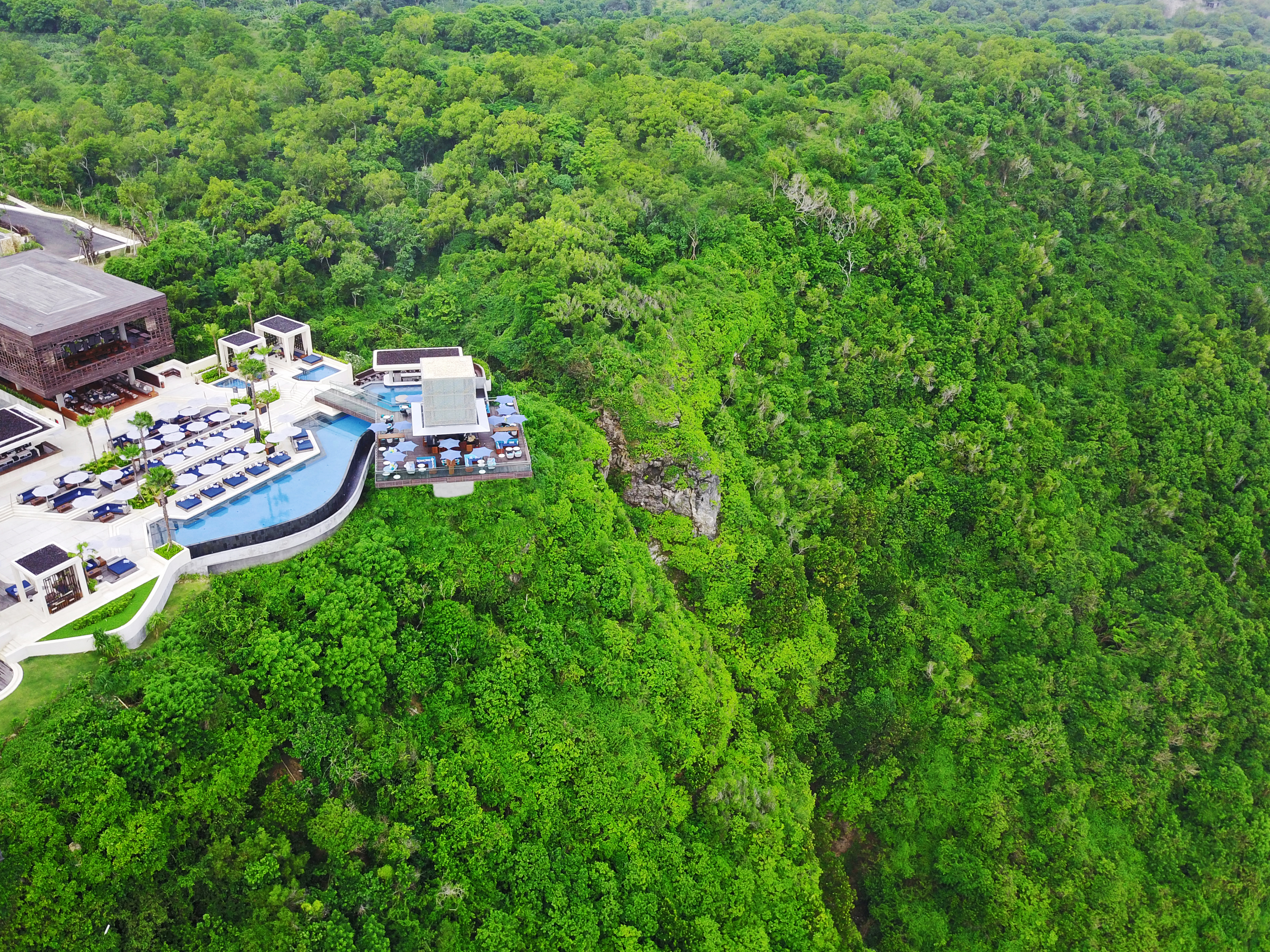 Part of worldwide hospitality company, Hakkasan Group, Omnia Dayclub is an offshoot of the group’s Omnia Nightclub collection worldwide, with locations that include Las Vegas and San Diego. At the new venue in Uluwatu, the day club is set right next to Hakkasan’s premier dining spot, Sake no Hana, serving modern takes on classical Japanese delights, including sushi, sashimi, and toban and kamameshi delights, courtesy of its original restaurant in Mayfair, London. The restaurant is located in the building seen in the top left hand corner of the photograph above.

The launch of Omnia Dayclub in Bali sees the next stage in the group’s expansion into Southeast Asia, following similar openings of its three brands, including a Hakkasan restaurant in Jakarta. This all-day dining and lounging twist to its worldwide nightclub collection will be a great addition to Bali’s own offerings for cool chill out spots, particularly along the exotic and luxurious cliff edge resort area of south Bali. 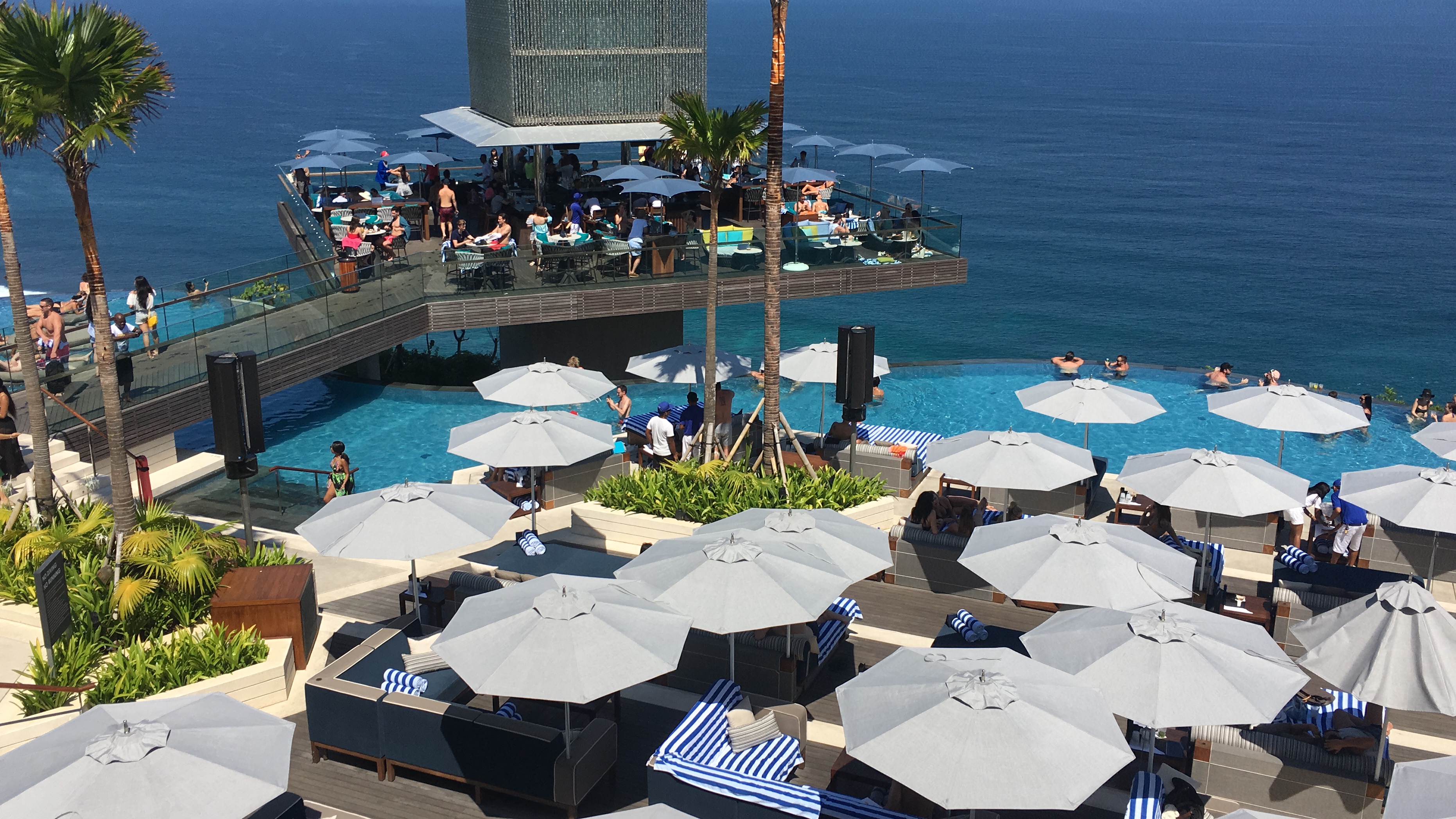 Omnia features an infinity edge pool looking over some of the best surfing waves in the world, exclusive cabanas with private plunge pools and bottle service for groups, a swim-up bar for the ultimate hands-in-the-air pool party moments. The Cube is the cinematic piece de resistance: a tower of shimmering silver which comes to life after dark when it lights up the horizon, creating unforgettable sunset hands-in-the-air memories of perfect island days. 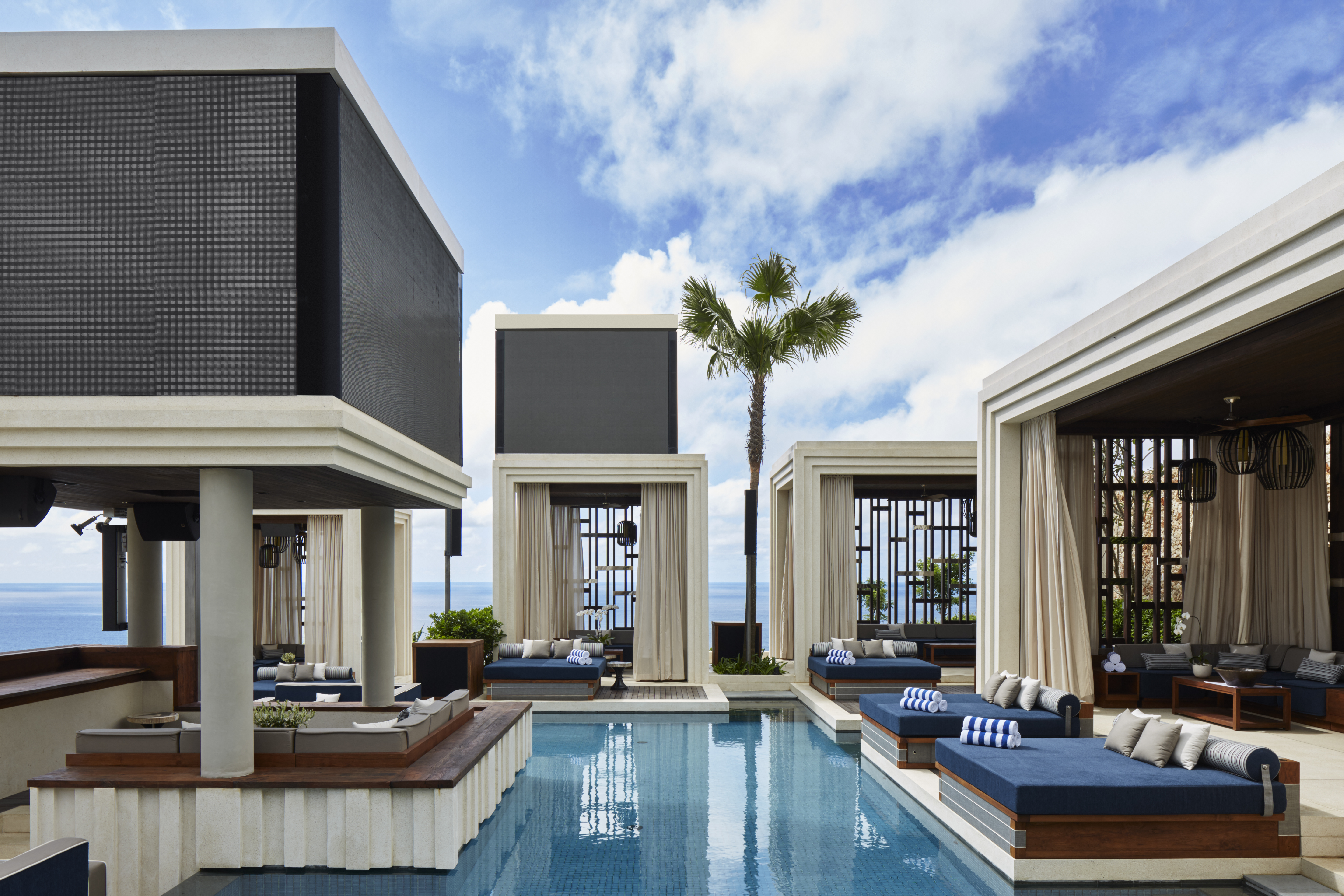 Luxury beach clubs can now offer MICE groups a lot more than many hotels and resorts. The club’s six private VIP cabanas can each fit 12-15 people, and can be booked for smaller events. Its entire lounge area and outdoor grass terrace can be reserved exclusively for up to 100 guests.

The Cube bar can also be reserved for up to 120 people, while the mezzanine-level dining room of the Japanese restaurant can seat up to 120 guests. For larger events, the entire club can also be bought out for up to 2,000 people. The club has a strict over-21 minimum age for guests, making it the only adult-only beach club in Bali. 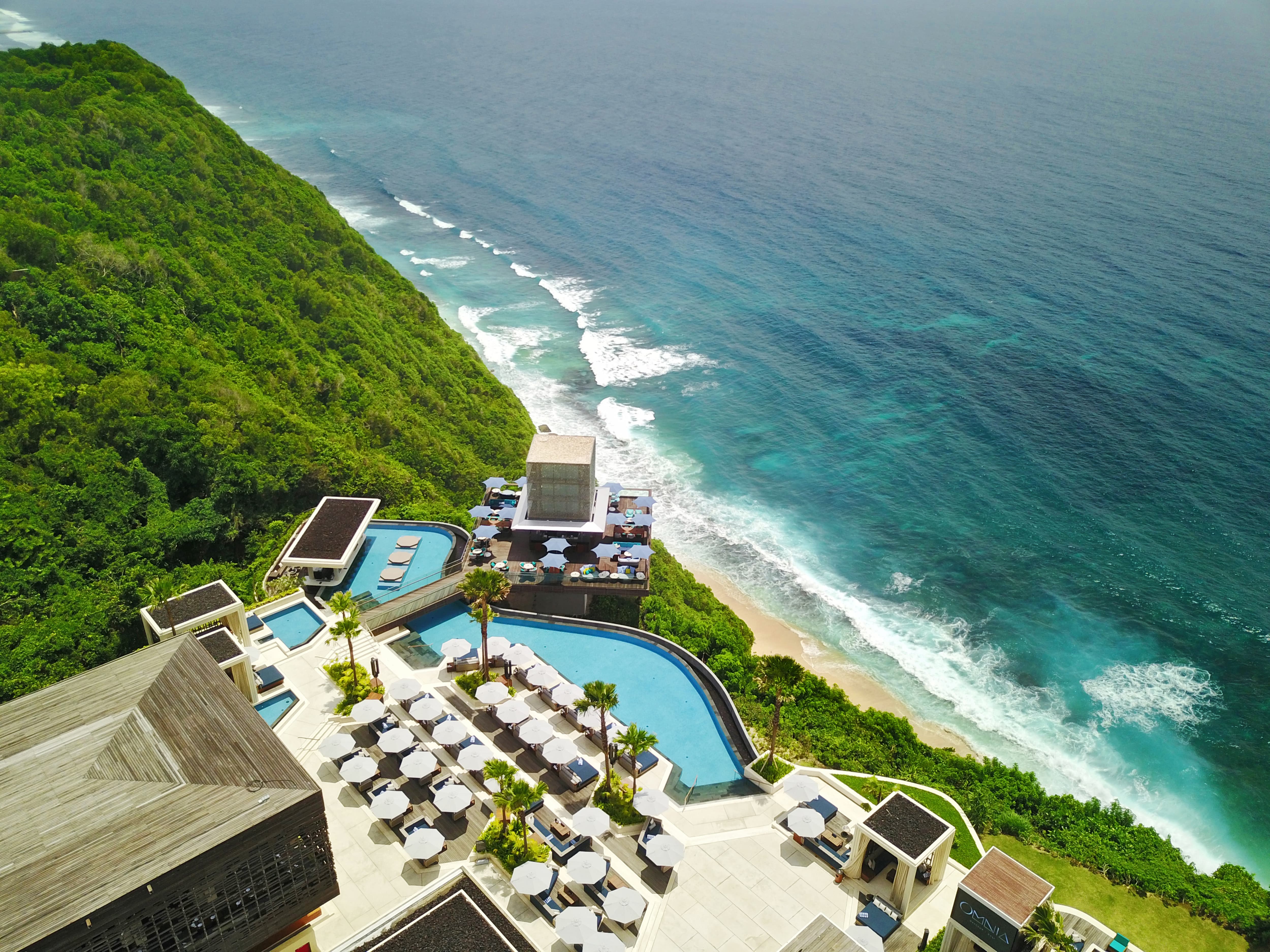 Indonesia, with 252 million inhabitants, is the world’s fourth most populous country with a large middle-class population. It is the 16th largest economy in the world and is projected to be the seventh largest by 2030. More impressive still, a report from PwC claims that it will be the fourth most powerful economy on the planet by 2050, behind China in first place, the US in second and India in third. Since 2012 the tourism industry has grown significantly as one of the top contributors to the Indonesian economy, jumping from 5th position in 2012 to 2nd position in 2016.

According to the Ministry of Tourism, the tourism industry, of which Bali plays a major role, jumped into the #1 position in 2017 by contributing US$17 billion to the Indonesia economy, ahead of the crude palm oil, oil and gas and coal sectors. With two in every five tourists visiting Bali and real GDP projected to grow by at least 5% per year over the next five years, the country’s young and increasingly urban population makes it one of the fastest growing consumer markets in the world. This augurs well for the continued expansion of the Bali tourism industry and the important role played by beach clubs and their derivatives such as the Omnia Bali Dayclub.