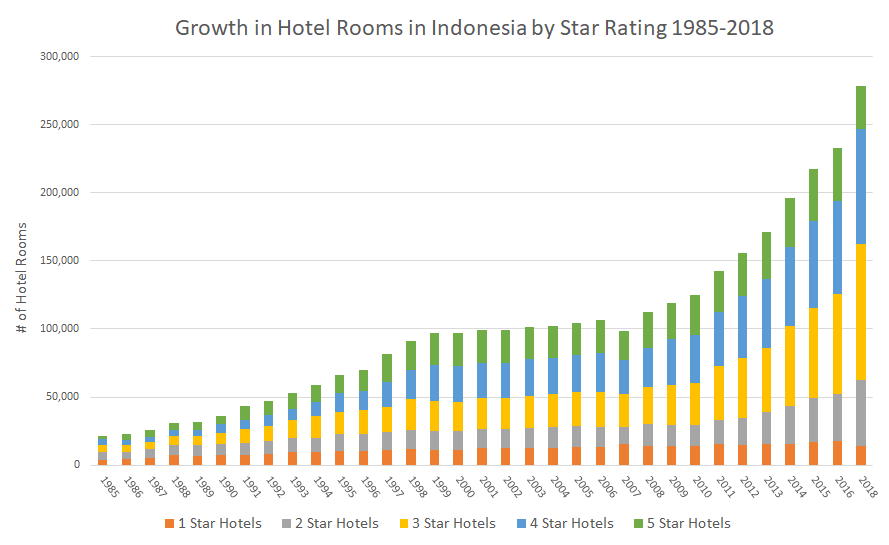 With tourist arrivals almost doubling over the past five years, growing from 8.8 million in 2013 to 15.8 million in 2018, Indonesia’s star-rated hotel supply has experienced a dramatic expansion over the same period.

Driven by the growth in inbound visitor arrivals and strengthening macro-economic fundaments, an expanding middle class, and rising consumer spending, the star-rated hotel sector is set to see a healthy 12% CAGR in room supply over the period 2019-2023.

An interesting trend relates to the declining average size of 4 and 5-star hotels in Indonesia as illustrated in the graph below. The average 5-star hotel has declined in size from about 480 rooms in the mid 1980s to about 200 rooms in recent years. Similarly, the average 4-star hotel has declined from about 240 rooms to 140 rooms over the same period, with ramifications for the fixed and variable cost structures of these properties.

According to a recent report from analysts at Lodging Econometrics, Indonesia is among the top countries for hotel construction. The reports identifies 387 projects with 65,405 rooms in Indonesia, with the largest construction pipelines led by Jakarta, with 99 projects/18,820 rooms.