Where are we in the Hotel Market Cycle? 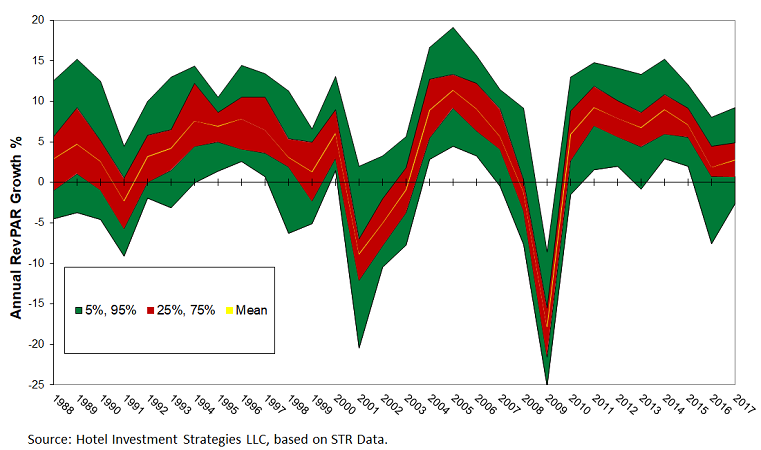 By most accounts, the period 2015-2017 was one of the most successful periods on record for the U.S. Lodging Industry. With Real RevPAR eclipsing the previous peak of Real RevPAR in 2007, hotel investors enjoyed returns not seen since the 1990’s – returns in the order of 20%. With “success” all around, investors can easily fall prey to the “success trap”, believing that current buoyant conditions are likely to continue in perpetuity.

Investors can also fall prey to the notion of “The Hotel Market Cycle!”  The national hotel market cycle gets a lot of press, reflecting as it does a general trend that affects hotel developers and investors across the country. Hotel news publications, data providers and conference speakers provide a steady stream of reports taking the temperature of market.

While it is important for hotel investors and operators alike to keep up with national trends, it is especially important to get a “reality check” by checking back in with local market conditions, as the local hotel market is the market that matters most!  The local market rules where developers or investors are trying to develop, buy or sell hotels. There are many “micro-markets” all over the country in different stages of their own unique market cycle. As an example, the following exhibit highlights the range of annual RevPAR growth rates for the Top 25 markets in the U.S.

Many hotel investors overreact to current market conditions. If conditions are favorable, they tend to become too optimistic in their decisionmaking, whereas unfavorable information causes them to make decisions that are too pessimistic. In other words, many hotel investors tend to project the present market situation (and perception) into perpetuity. This is often caused by investors confusing the short-term cycle with the long-term trend which leads to asset prices overshooting fundamental values especially at cycle peaks.

Deciphering whether a hotel market displays mean or trend reverting characteristics can make a huge difference in the performance of hotel assets including income and appreciation returns. Real (inflation adjusted) hotel cash flows per room are either mean or trend reverting depending on a range of factors including service quality, location, price category and size.

Mean reversion is a tendency for a stochastic process, such as real cash flows, to remain near, or tend to return over time to a long-run average value or a constant mean as illustrated in Exhibit 2. Trend reversion, on the other hand, is a tendency for a stochastic process to return to a long-run trend. In this context it does not imply a monotonically increasing or decreasing series but simply to the lack of a constant mean. 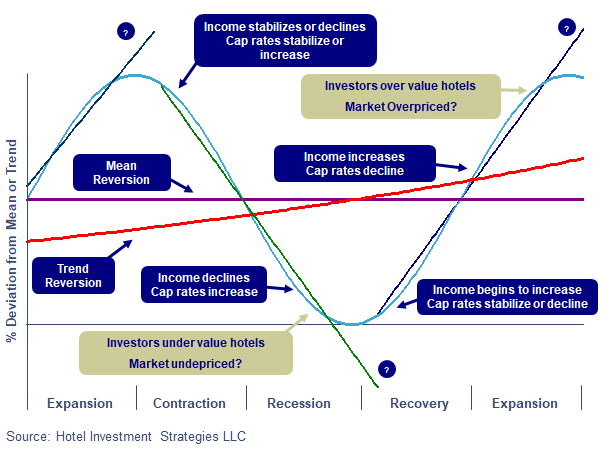 When real cash flows are highest relative to trend, hotel investors should expect negative (or at least below average) real cash flow growth and cap rates should therefore be relatively high. However, an analysis of historical data reveals a negative relationship between cap rates and the ratio of market to long run equilibrium real cash flow. Over the past decade it would appear that many hotel investors have not built the “obvious” mean reversion into their forecasts of real cash flow growth and thus have overvalued hotels at the cyclical peaks (used too low cap rates) and undervalued hotels at cyclical troughs.