Diversification and asset allocation play important roles in determining the overall performance of hotel portfolios. What most hotel investors don’t realize, however, is that the foundation for a sound asset allocation strategy is built upon a widely accepted mathematical technique called mean-variance optimization (MVO). The MVO process combines hotel investments with different characteristics into portfolios that have the highest return for a given level of risk or the lowest possible risk for a given level of return based on a set of assumptions about risk, return, and return correlations. These hotel portfolios are known as efficient or optimal portfolios. Many hotel investors claim to have highly diversified portfolios. Just because a hotel portfolio is geographically disperse doesn’t mean that it is geographically diverse in an economic sense.

Many investors believe that their hotel portfolios are diversified because they have invested in a number of markets throughout the country. Holding hotels that tend to move in concert with each other does not lower portfolio risk!   In recent times, we have used cluster analysis, a statistical data tool, to develop homogenous groupings of hotel markets in the U.S. and Canada for our clients seeking to construct efficient hotel portfolios. We have explored the diversification opportunities across U.S. and Canadian hotel markets and reported on the crucial economic factors for determining the relationship of hotel asset performance among different metros. If you would like to discuss these matters, please feel free to call us.

The only economically rational and intelligent way to diversify a hotel portfolio in the U.S. is by metro area or location. While many investors claim they have ‘geographically diverse’ portfolios, there portfolios have been constructed using an intuitive approach which has invested in a number of different geographic locations in the hope that the variance of the expected return on the portfolio is lowered without calculating the correlations of hotel returns. Many investors have the misguided view that risk is proportionately reduced with each additional hotel or market in a portfolio, when in fact risk could be increasing if the added returns are highly correlated with the returns of existing assets.

Grouping hotel markets with similar characteristics is the first step in developing a rigorous and empirically based diversification and asset allocation strategy. By employing cluster analysis, a powerful statistical analysis technique, we are able to group hotel markets by maximizing within-group homogeneity while also maximizing differences between hotel market groups. While several different clustering techniques are available we have used K-means clustering as described at the end of our post.

To illustrate the K-means clustering technique we have used data from STR’s Monthly Hotel Review for the period 2008-2017. The Review provides annual percentage changes in RevPAR for the Top 25 hotel markets throughout the U.S.

Four distinct clusters were identified through the procedure as illustrated in Exhibit 2. Cluster 3, which includes the Houston, New Orleans, Oahu Islands and San Francisco hotel markets, recorded the highest arithmetic annual growth in RevPAR at 4.6%. The cluster also recorded the second lowest risk as noted by the standard deviation in annual percentage change in RevPAR between 2008 and 2017. On a risk-adjusted basis, cluster 3, recorded the highest risk-adjusted  percentage change in RevPAR, followed by clusters 2 and 4. Cluster 1, which included Miami, New York and Philadelphia hotel markets, recorded the lowest arithmetic annual percent change in RevPAR but the highest risk. Quantifying how each cluster has performed in risk and return space helps different types of investors identify the types of clusters that meet their particular needs. 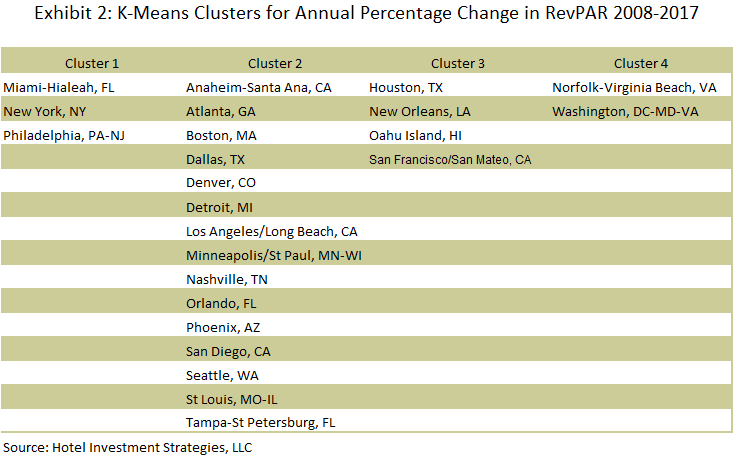 Cluster analysis can also be used on time series data such as the annual growth of room nights, supply of rooms or annual per-room value growth. Exhibit 3 provides the standardized annual growth for RevPAR for the clusters between 2008 and 2017. Each cluster shows a distinct pattern. Cluster 3 markets experienced the highest RevPAR growth rates at the onset of the Great Recession, had a moderate decline during 2009 and experienced the highest RevPAR growth rates in the 2010-2014 period. The performance of the other clusters is illustrated in the following graph. 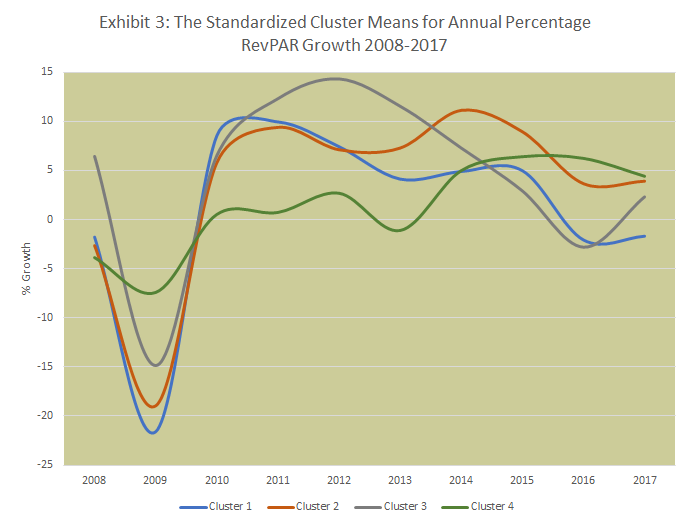 Our illustration of K-means clustering demonstrates how investors seeking to construct a diversified portfolio can acquire new hotels in markets that do not belong in the same cluster, effectively diversifying the volatility and capital returns in the overall portfolio.

Clustering is the classification of objects or in our case hotel markets into different groups, or more precisely, the partitioning of a data set into subsets (clusters), so that the data in each subset (ideally) share some common trait – often proximity according to some defined distance measure. Data clustering is a common technique for statistical data analysis which is used in many fields, including real estate as illustrated by the references provided below. The objective of cluster analysis is to assign observations to groups (“clusters”) so that observations within each group are similar to one another with respect to variables or attributes of interest, and the groups themselves stand apart from one another. In other words, the objective is to divide the observations into homogeneous and distinct groups. The K-means algorithm assigns each point to the cluster whose center (also called centroid) is nearest. The center is the average of all the points in the cluster — that is, its coordinates are the arithmetic mean for each dimension separately over all the points in the cluster. Example: The data set has three dimensions and the cluster has two points: X = (x1, x2, x3) and Y = (y1, y2, y3). Then the centroid Z becomes Z = (z1, z2, z3), where z1 = (x1 + y1)/2 and z2 = (x2 + y2)/2 and z3 = (x3 + y3)/2.

The algorithm steps are¹:

• Choose the number of clusters, k.

• Assign each point to the nearest cluster center.

Repeat the two previous steps until some convergence criterion is met (usually that the assignment hasn’t changed). The main advantages of this algorithm are its simplicity and speed which allows it to run on large datasets.

Cluster analysis is often accompanied by discriminant analysis, a statistical analysis tool that identifies the variables that distinguish one cluster from another. This statistical tool involves a linear combination, or variate, of two or more independent (or explanatory) variables that best discriminate between the cluster groups already identified.

¹ MacQueen, J. B. (1967). Some Methods for Classification and Analysis of Multivariate Observations, Proceedings of 5th Berkeley Symposium on Mathematical Statistics and Probability, Berkeley, University of California Press, 1:281-297

Further articles on the application of cluster analysis in real estate include: