In Search of ‘Alpha’ and ‘Beta’ Hotel Markets in the U.S. 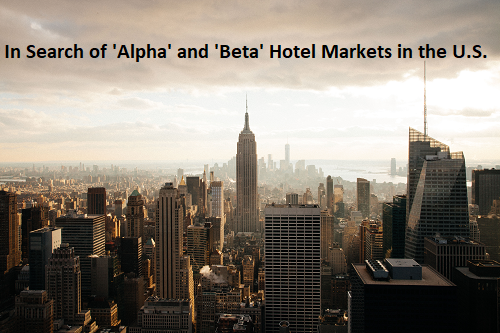 These are among some of the questions we have been asked in recent times by clients planning to reposition their portfolios in light of favorable economic conditions and a buoyant hotel market. We usually seek to understand what our clients mean by ‘best’ because the term means very different things to different people. Are they developers seeking development opportunities or are they investors seeking value-add or opportunistic type returns. What is their investment horizon and their appetite for risk?

Constructing a portfolio by evaluating the risk and return for individual hotels is unlikely to guarantee that an optimum portfolio will be obtained. Indeed, any new hotel that is being considered as an addition to a portfolio should be judged on the grounds of “efficiency”; that is, whether its addition to an existing portfolio will increase expected portfolio returns while maintaining or lowering portfolio risk. As such many hotel investors are focusing on how much of their returns they should expect from beta and how much from alpha!

Hotel investors commonly believe, implicitly if not explicitly, that they are getting a higher expected return without assuming greater risk. Clearly, every hotel investor is interested in investments with a weak – and therefore favorable – relationship between the expected rate of return and the expected level of risk. Most seek positive “alpha”, the measure of a hotel investment’s return over the market’s return. While most hotel investors think they can produce positive alpha, the sum total of alpha in a market is zero, so if one investor wins, another looses!

In recent years beta has become a synonym for market movement or exposure. Receiving a return from beta in a portfolio construction context means getting return from being exposed to a particular segment or market.

Seeking the highest risk-adjusted returns, hotel investors use a range of techniques, including DCF analysis to try and distinguish between “superior” investments (i.e., more return per level of risk) and “inferior” investments (i.e., less return per level of risk). Without an empirical framework of market equilibrium however, it is doubtful whether hotel investors can consistently outperform the market, other than by chance!

A useful starting point is an analysis of the historical growth in RevPAR performance of lodging chain scale segments, hotel location segments and hotel regions over the past five (2013-2017), ten (2008-2017) and thirty year (1988-2017) periods as illustrated in this article. Lacking a comprehensive return series for hotel real estate investment, we have used RevPAR growth rates from STR, Inc. While RevPAR growth rates are not a complete measure of hotel real estate returns, they are significantly correlated.

RevPAR growth has been used historically as a reliable indicator to measure the potential for hotel profit growth. Robert Mandelbaum, a Director of Research Information Services for CBRE Hotels’ Americas Research, found that there was an 86% correlation between annual changes in RevPAR and gross operating profit (GOP) from 1960 to 2016. An excellent article by STR titled “How RevPAR growth translates into profits” illustrates that a 1% increase in RevPAR equates to a 1.5%-2% increase in gross operating profits per room.  We can conclude therefore that changes in RevPAR provide a very strong indicator of changes in GOP. 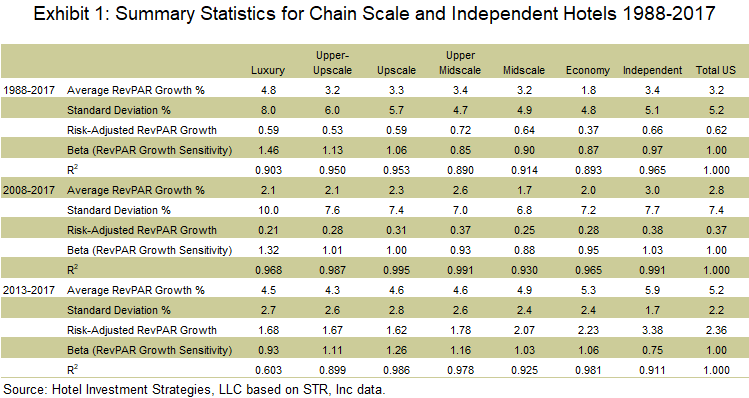 A beta of 1 indicates that a market/segment has a risk level equal to that of the nation, and that the market/segment’s RevPAR growth rate will mirror the movement of RevPAR for the nation. A beta of less than 1 tells an investor that a particular hotel market/segment is less volatile than the overall lodging industry, while a beta higher than 1 signifies a risk level higher than that of the nation. Luxury hotels have therefore been the most volatile sector, but have recorded the lowest ex-post and ex-ante going-in cap rates and IRR’s! Go figure!

The clear winners in terms of risk-adjusted RevPAR growth over the past ten and thirty year periods were the Interstate and Small Metro/Town segments which may come as a surprise to many investors! Interstate is defined as hotels in close proximity of major interstate highways whose primary source of business is through interstate travel. Interstate properties located in suburban areas have the Suburban classification. 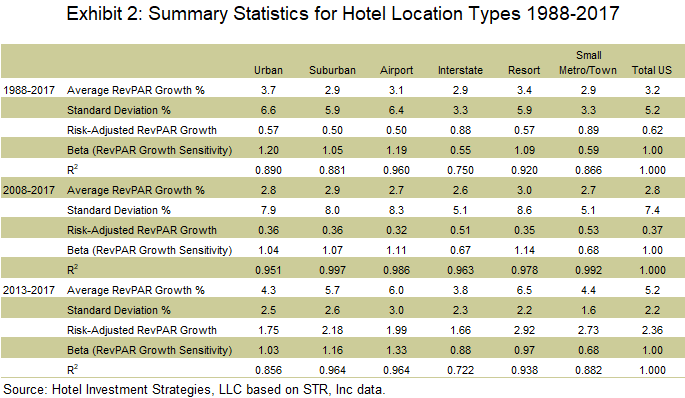 Small Metro/Town is defined as metropolitan small-town areas with less than 150,000 people. Size can vary dependent on market orientation. Suburban locations do not exist in proximity to these areas.

Accounting for about 30% of rooms in the U.S., judicious investments in these sectors may be a valuable addition to a large-city only portfolio, both as a return enhancer and a risk diversifier.

The Urban and Airport location segments recorded the highest betas over the past thirty years. In the case of the Urban segment, a 1-percent change in the RevPAR growth rate for the U.S. Lodging Industry as a whole was associated with a 1.2 percent change in the Urban segment’s RevPAR growth rate.  Interestingly, the Airport segment recorded the lowest diversifiable risk (highest systematic risk) as recorded by the high R² over the past thirty years while the Interstate and Small Metro/Town segments recorded the lowest systematic risk.

Exhibit 2 underscores the importance of measuring risk when targeting market segments for hotel investments. By focusing only on RevPAR growth and ignoring risk, investors are likely to achieve sub optimal risk-adjusted returns.

Things are different if we stretch the investment horizon over ten years (2008-2017). If you owned an independent hotel in a small metro/town¹ in the East South Central Region (Kentucky, Tennessee, Alabama, Mississippi), the chances are that the property enjoyed some of the best risk-adjusted growth in gross operating profits in the country. Midscale hotels located at airports in the Middle Atlantic Region (New York, New Jersey, Pennsylvania are likely to have experienced some of the worst risk-adjusted growth in GOP!

The lowest correlation coefficient is 0.733 between the Middle Atlantic and East South Central regions. There is limited opportunity to diversify a hotel portfolio by chain scale segment or location type due to high positive correlations. The only economically rational and intelligent way to diversify a hotel portfolio in the U.S is by metro area!

If you would like to find out more on the way we can assist you identify the markets most suitable for your portfolio, please contact us at 973-723-0423 or by email. Please refer to our hotel market selection and targeting services.

¹Area with either a smaller population or remote locations with limited services. Size varies by market orientation. Suburban locations do not exist in proximity to these areas. In North America, metropolitan small town areas are populated with less than 150,000 people.